The namesake of the chapter is Mr. Buford A. Johnson. Buford was a retired Master Sergeant in the
United States Air Force. He was the first African-American jet mechanic and Crew Chief in the Air
Force and the first African-American Jet Crew Chief to serve in a combat zone. In his honor, in 2008
the chapter name was changed from the Inland Empire Chapter of the Tuskegee Airmen to the Buford
A. Johnson Chapter of the Tuskegee Airmen, Inc. We are proud and blessed to have had Buford, a
documented Original Tuskegee Airman, in this chapter. 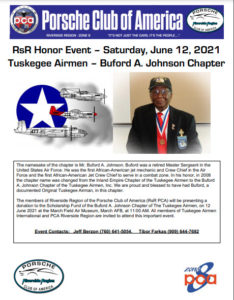